Rattlesnake Lake and The Town That Never Quite Was 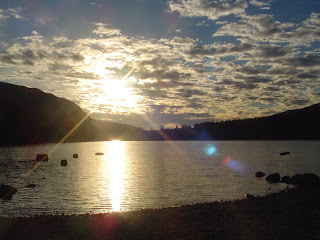 About a mile from my place is Rattlesnake Lake, so named because a pioneer surveyor heard the rattle of seed pods and thought he was being attacked by a rattler, not realizing that there are no poisonous snakes in Western Washington. The lake is a popular picnicking, fishing and hiking destination. Rattlesnake Lake is fed by underground springs, which cause an interesting ebb and flow to the size of the lake - in winter the lake looks quite normal, but in the summer the lake recedes a lot, uncovering its earlier life, the town of Moncton, a town that never quite was.
Moncton was in existence from 1906-1915, and was a railroad town, offering access to the Cedar River Watershed that brought water to Seattle and the surrounding area. A new community was built on the rail line along the shores of Rattlesnake Lake. The new village was named for one of its settlers, a Mr. Moncton. The town grew - by 1915, more than 200 people lived in Moncton, and the fledgling community had a hotel, a barbershop, a saloon, a restaurant, a few stores, and even an indoor swimming pool (little did they know that by summer an indoor pool in town would not be needed). A school on the north end of town provided education for children up through 8th grade. Older students had to walk or ride a horse seven miles to the nearest high school in North Bend.
In 1915, due to a new dam being built nearby, water started seeping through the hillsides near the town, which led to mini-geysers being formed, which had nowhere to go but into town. A slow-motion flood began, first outside of town, then in the streets of town, and by May of that year, the water was rising nearly a foot a day, causing the eventual condemning of Moncton.
Here are some photos of the town as it was flooding: 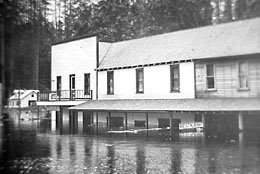 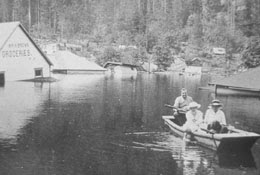 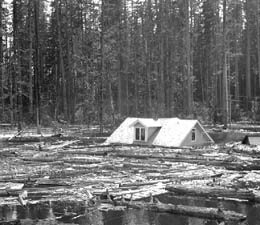 (Thanks to HistoryLink.org and the Seattle Public Utilities for the history and pictures of old Moncton.)
On Saturday, after I got the Christmas lights up, I rode up there in the Elite to take a few pictures before it got dark. 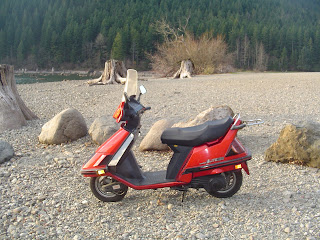 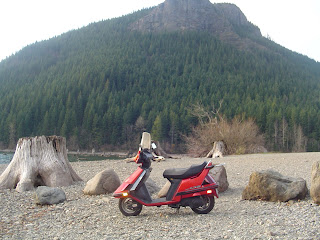 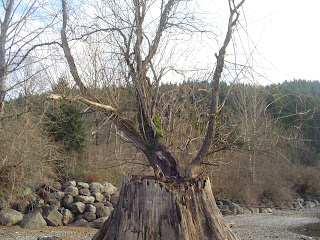 The lake is in the Cedar Falls Watershed area, and Seattle Public Utilities has a nice Education Center that provides some of the history of this area. The Education Center promotes green- and water-saving building techniques, such as this thatched roof: 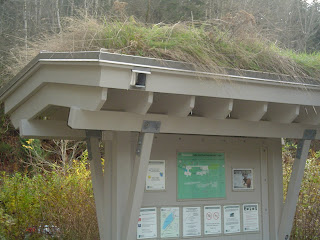 They also have a "water drum" area where the rain water is used to create a symphony of drumming - it's pretty amazing to hear these when it rains: 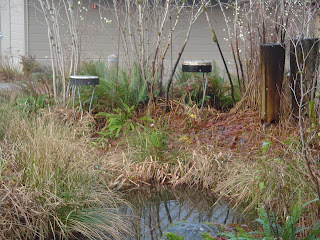 This picture is from the Education Center looking towards Rattlesnake Ridge: 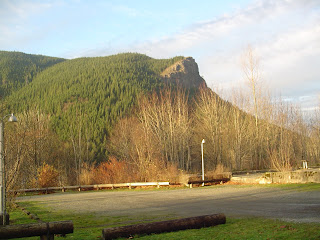 Sounds like interesting hydrology in that area. I'm sure the residents thought it was more than that when the waters came.

Nowadays, there'd be tests and surveys and impact studies and then talk of compensation.

Thanks Doug - what I have found is that the glacial moraine is the cause for the ease of water rising and falling in the lake. In recent summers the lake becomes not much more than a large pond and you can see the pilings from some of the old buildings.

What an interesting story. We feel for the poor people who lost everything in this situation. Some really nice photos you took, thanks. A name like Rattlesnake Lake does not lend itself to positive promotional materials. If we didn't know the history of the name we would not be eager to visit there.