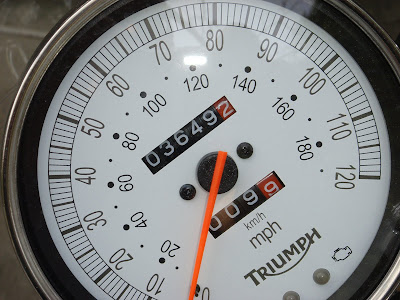 Actually, a little over 3500 miles. With the mild weather I have been able to get more riding time than I could have imagined. I thought it would be a good time to post my observations on my Triumph Bonneville America.

Maintenance Required - None really. The only services I have brought the bike in for was its 600 mile oil change and check up, and another oil change at 3000 miles. The bike has not left me stranded, and has performed flawlessly. More on performance below.

Performance - I continue to be amazed at how this bike performs. I know this is very subjective, but it does seem that the bike's acceleration has improved as the engine has broken in. Throttle response is excellent, and the torque is always satisfying to me. At about 70 mph, the bike is running at around 3800 rpm. While the big cruisers will drop into the high 2k or low 3k with a 6th gear, the America never feels buzzy for me at highway speeds. Triumph's 865cc parallel twin is a proven engine and can stand up to all sorts of driving requirements.

Handling - Triumph's are known for their handling, and the America does not disappoint. It is truly enjoyable to ride the twisties on this cruiser. It's not a sport bike, but for a cruiser this bike takes curves with a lot of grace. Also, since it's not as heavy as the big cruisers, the America is easy to take around town and to park.

Gas Mileage - I get from the low to mid 40's on the America, with a mix of street and freeway riding.

Looks - OK, beauty is in the eyes of the beholder, but I still think this bike is stunning. I get a lot of compliments on the bike, and a lot of "when I was young I had a Triumph" comments. The America is a great conversation starter.

Overall - If you want a bike that can do a lot of things very well - an in-town bike, a long-distance cruiser, something to take on the country backroads, or mountain curves, I recommend the Bonneville America. I have found the bike great for all of these, and it does it at a relatively inexpensive price (around $8700).

I have lightly modded the bike, mostly cosmetic in nature. When I bought the America, I had it "stage one'd" which included the long Triumph Off-Road Silencers (Triumph-speak for pipes), and a better breathing airfilter. That's the only thing I have done performance-wise (and it improved the bike's rumble as well). I have the Triumph Roadster Windshield, Triumph Engine Dresser Bars (Triumph-speak for engine guards). I have a set of bags for which I purchased EZ Brackets (I haven't installed these since I really like the "naked" look of this bike). I removed the pillion and replaced that with a chrome fender bib, and have added a tool bag up front.

I have been considering a light bar for additional light and conspicuousness on the road, but have instead ordered a set of Kuryakin Silver Bullet Halogen Lights to install on my forks for this purpose. I installed a Kisan Tailblazer modulating tail light - I have noticed almost immediately the improvement in drivers seeing my back end with this product - more on this in a future post.

The America is a keeper as far as I am concerned - I may include other bikes in the garage, but they will be in addition to, not as a replacement for, this bike. 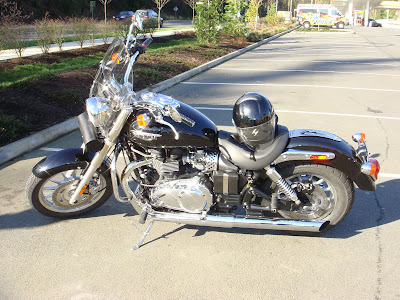