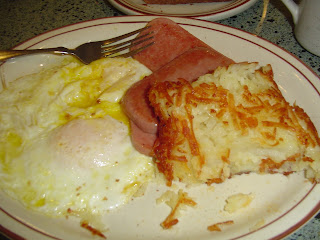 I really like Spam. Growing up, I ate Spam and rice, Spam and eggs and Spam sandwiches. I like it cooked (fried) or plain right out of the can. I'm a Spam lover from the old school - I remember when the tin came with a key that you used to open the can with.

While this meat product is often ridiculed, Spam is very popular in Hawaii. Hawaiians consume nearly 6 million cans a year, or almost six cans per person. Spam became popular in Hawaii during World War II. Fresh meat was scarce at the time, so civilians loaded up on the brand-name C ration well known to the armed forces. Needing no refrigeration, this very distant relative to pork soon became one of the items islanders stocked up on during threats of hurricanes. It truly is Hawaiian soul food. McDonald's is well known for adopting cultural influences in their menus, serving wine in France and beer in Germany - Hawaiian McDonald's restaurants offer as a breakfast meal Spam, rice and eggs (which I have had). In Hawaii you can also find Spam sushi (I haven't tried this...yet). This must be where my love of Spam was born, as my family and I lived in Honolulu when I was in grade school. 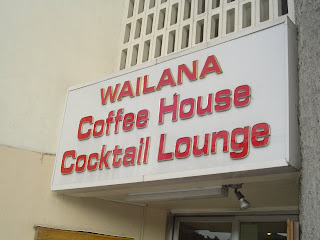 On the last day of my visit I went to the Wailana Coffee House, right across from the Hilton Hawaiian Village in Waikiki, for breakfast - the top picture is what I ordered - eggs, hash browns and, of course, Spam. Lovely!
Posted by Lance at 8:01 PM 17 comments: 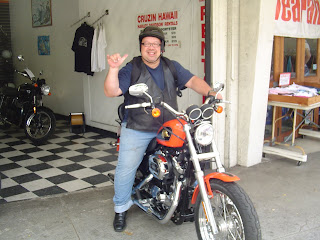 As noted in my previous post, I was asked to come out to Honolulu for business reasons. I consider myself very fortunate to be able to travel to some nice places and meet some very nice people in the course of my business. Hawaii is a beautiful place - the natural beauty of the Islands and the friendliness and hospitality of the people of this state is simply amazing.

After completing my business responsibilities, I decided to do something I had been thinking about doing for some time, ever since I got involved in motorcycling, which was to ride in Hawaii. There are many places to rent scooters and motorcycles in Honolulu, and a few rent Harley Davidsons. I chose Cruzin Hawaii (http://www.cruzinhawaii.com/) as they had an excellent selection of Harleys, plus some Triumphs to choose from. If you are ever in Honolulu and want to rent a bike, I recommend Cruzin Hawaii - the motorcycles are in excellent condition, and the staff there will give you some great suggestions for riding on the Island.

I ended up renting a 2007 Sportster 1200. After we went over the bike, I was ready to ride. The first thing I noticed was that this was a HUGE step up in power from my 250cc bike! The Sportster is like a wild horse - she wants to run! I ended up staying in first gear most of the time as I was driving along busy Waikiki, as I could get up to 30 mph in that gear alone. I was surprised at how easy it was to handle this bike - I think the Sportster is nearly 200lbs heavier than my GV250, yet it didn't feel that much heavier. The pegs are more centered on the bike, unlike mine, which are more forward, and I actually felt more comfortable on the Sportster. One weird feature of the bike (apparently this applies only to the 2007 and beyond Sportsters, and does not apply to the other models in the HD lineup) is that you must actually be in neutral to start the bike. You can't just pull in the clutch to start it. I don't really like this feature, as one time I stalled the bike and had to walk it to the side of the road, find neutral and then restart it.

Once I got out of town, the road opened up more, and the views of the ocean were fantastic. 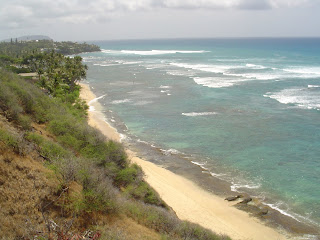 The picture below is taken from the famous Halona Blowhole - the blowhole is a natural occurrence formed by molten lava tubes from volcanic eruptions thousands of years ago. The lava tubes run to the ocean and, when the surf is right, the blowhole shoots water up to 30 feet in the air. It was hard to time my pictures with the water shooting out of the blowhole, but it was an amazing site. 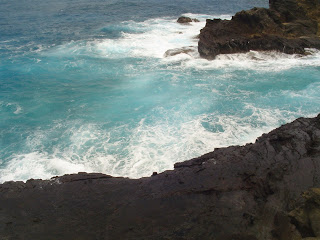 Further north and inland there are some beautiful scenic lookouts showing the island valley floor - I took this picture of the Sportster from one of those stops. 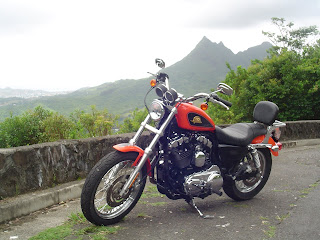 Probably the most popular lookout is called the Nuuanu Pali lookout. To get here, you travel about a mile of two off of the Pali Highway, and you are rewarded with fantastic views: 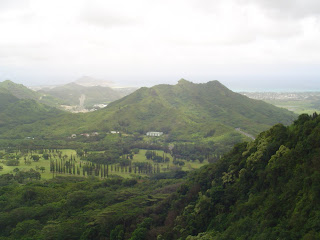 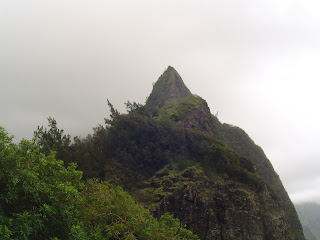 I ended up riding about 4 hours. I'm really glad I did this - I got to test drive a bike I had been considering for my next bike, I got to actually ride a motorcycle in paradise, and got some amazing views of the Island.
Posted by Lance at 8:31 PM 21 comments: 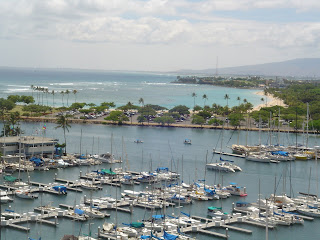 I'm traveling again, a short trip, unfortunately by the looks of it. You probably know where I am. Here are some pics, and more to come... 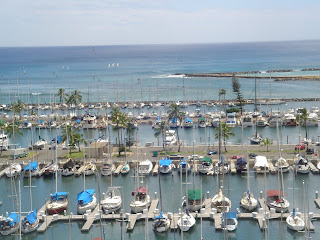 London one week, New York the next 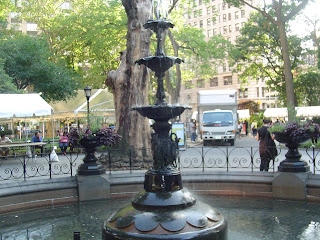 After my daughter and I returned from London, I had a few days in the office, and then I was off to New York for a week. I haven't been traveling all that much this year, so I feel the differences in time zones. As I have mentioned previously, I really like New York. Like London, many nations are represented; it was amazing to see the mix of peoples, languages and cultures.
Our office is near Madison Square Park, and I walk through the park every day. It's a beautiful park - that's what I like about Manhattan; in the midst of all of the concrete and steel sit a number of restful oases.
Some pictures from the park: 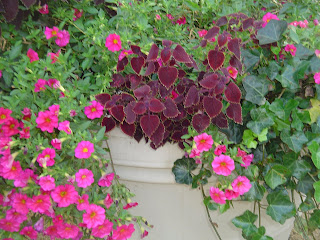 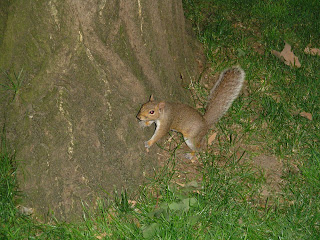 Why a squirrel? Danny is his blog "A Blog About..." documents the antics of the squirrels living in his yard. I found this New York squirrel very entertaining, so this one's for you Danny!
Posted by Lance at 8:58 PM 8 comments: 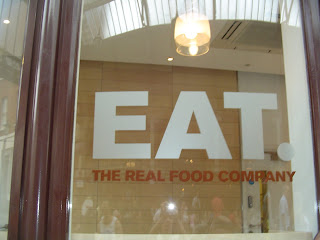 Typical English food sometimes gets a bad rap for not being very inventive, with meat and potatoes considered the mainstay - in this sense it's really not too different from what is considered American food. However, there are some very great restaurants in London, and with the many cultural influences that merge in this city, food should be on the itinerary of anyone traveling to London.
Our hotel booking included an English breakfast, which consisted of a fried egg, some potatoes, bacon (not strips like American bacon, but a thin slice of ham), a large sausage, cooked tomato, mushrooms and toast. It was very good, as was the coffee.
My daughter and I had dinner at a local pub one night - I had traditional fish and chips, complete with "mushy peas," while she had a cheese sandwich. 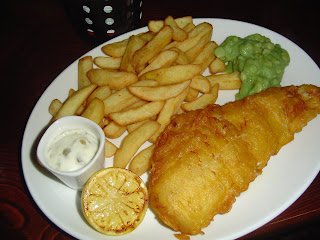 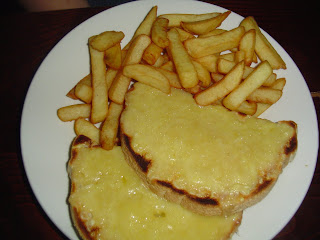 The Paddington area is quite diverse, and being a fan of Indian food I found a couple of nice Indian restaurants - they say that the best Indian food is in fact in London. My daughter, being more conservative gastronomically, found a great panini place. Both places were located down this street: 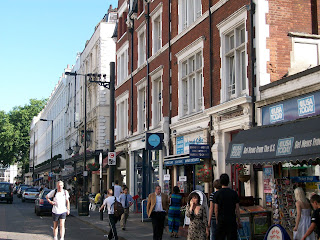 We were treated to some fine restaurants by friends, such as Rocket (http://www.rocketrestaurants.co.uk/) and the OXO Tower Restaurant (http://www.harveynichols.com/output/Page128.asp). Excellent food, service and views.
Of course, fast food is quite popular, and there was a McDonald's right next to the hotel, a Burger King across the street, and a Subway and KFC down the street. I will admit to going to both McDonald's and BK while we were there. And there are many Starbucks coffee shops throughout London - being from Seattle, motherland of the coffee behemoth, we just had to try it: 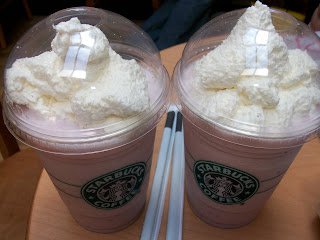 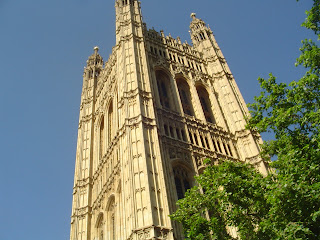 While we were in London, for some reason I couldn't post pictures, so I am catching up. London (and the surrounding area) is beautiful - the views are amazing, and I was in awe of the architecture (both old and new) and the scenery of this great city.
A view of the London Eye, which was built for the Millennium celebration: 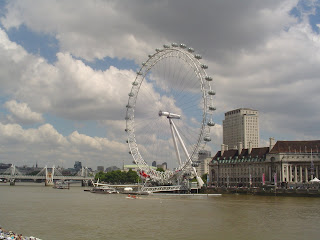 A picture taken from the London Eye - it's an approximately 30 minute round trip on the Eye, enabling one to get some fantastic looks of the city. This is the House of Parliament: 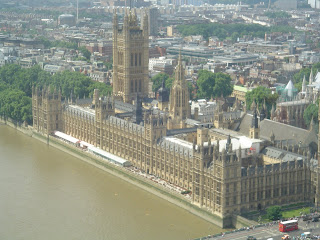 There are beautiful gardens in the area, this one from Hampton Court: 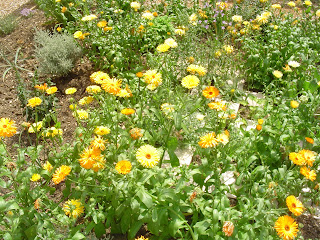 After visiting Hampton Court, my daughter and I went back to London via a river cruise. It's a little over 3 hours, compared to a train ride of about 40 minutes, but well worth the extra time. With the temperatures in the mid to high 80's during our London visit, the cruise was very refreshing. The boat we were on was very nice, with seats inside and outside, and a bar for snacks and drinks. I took this picture of one of the many beautiful homes on the Thames: 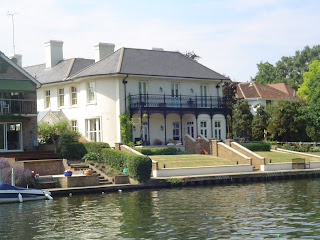 I was very impressed with the public facilities in London - the main train stations are quite nice, with lots of shops, restaurants and other necessary facilities. Maybe they are nice because
you have to pay to use them, as shown by this sign from the men's restroom at the Waterloo Train Station: 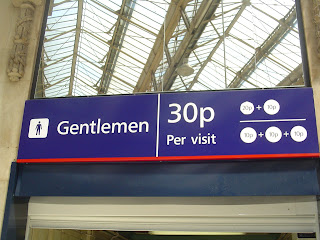