How To Shower Properly, Part II

First off, thanks to Baron of Baron's Life fame for posting a very funny video on the differences in showering habits between men and women - check it out here:

http://baronsview.blogspot.com/2009/03/how-to-shower-properlymen-versus-women.html
Just after I read his post, a radio station had a similar discussion on showering - this one was, "do you or do you not wash your feet when showering?" There were some interesting responses, that seemed to be divided into the female vs. male schools of thought on this issue. Most of the women said yes, while most men said no. The reason that the men gave was because there already was soapy water on the shower floor, so their feet were getting cleaned just by being there. One guy even said he doesn't wash anything below the kneecaps! Most of the women polled thought that was pure laziness and exhibited a lack of hygiene on the part of men.
So, there's a poll on my blog - feel free to provide your response, and make any comments - is not washing your feet efficient or disgusting?
Posted by Lance at 9:34 AM 34 comments:

I decided to put a few items for sale on Craigslist, which included my ipod. It's an 80gb video ipod, immediately placed in a case when I got it, so it's like new. I wasn't using it anyway (I prefer my 1gb Muvo player, which isn't as fancy, but gets the job done) so I thought it would be good to get this to someone else who could really use this.

I got MANY interested buyers - it was like I threw some chum into shark-infested waters the e-mails came in so quickly. But despite the overwhelming response, it hasn't sold - here's a sampling of some of the interesting responses I received, but had to regretfully decline:

2. The "trade" response - No, I am not willing to trade you my ipod for your ipod - I'm trying to get rid of mine, so why would I need another one???

3. The "$100 to ship it" response - This is also known as the "son of a West African Minister who was forced out of the country by political opponents but before fleeing the country had stowed away $10 million in a foreign bank" response. I got two of these, and they both wanted to buy my ipod for a relative/friend who was out of the country (like you can't get an ipod outside the US????), and were willing to add $100 to the purchase price if I would accept a "Fedex wire transfer" (I didn't know these existed, and as a matter of fact, neither does Fedex) to ship the item.

4. The "sure, I'll buy this" response - I had one person commit to buy, and we were to meet at an agreed location at an agreed time. I was there, at the right time, but no buyer.

So, if anyone wants to buy an ipod for a good price, particularly if you want to trade me your 2009 Honda DN-01 for it (see below - I'm willing to trade straight across), let me know! 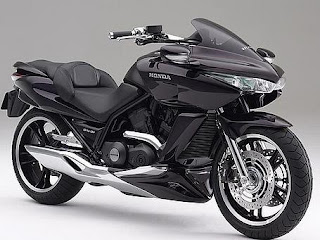 At long last the bad weather we've been having here let up for just one day. Yesterday was pouring, tomorrow we might have snow, but today it is dry. So, after running a couple of errands, I took the bike out for a ride. As you will see below, I've got a new bike - I mentioned in an earlier post that I really liked some of the "alternative" cruiser bikes out there, and I found this bike, a United Motors/Hyosung 250cc cruiser, in the colors I was looking for. I bought the bike from a retired couple in Southwest WA - it's a 2007 model, with only 150 miles on the odometer. It didn't take me too long to get the hang of clutching and shifting - the balance acquired from riding my Elite really helped. In case you are wondering, I'm keeping the Elite - I'm attached to her, as she was my first, and will continue to ride her.
It was so nice to be able to ride - I've been waiting for this day for weeks, checking the weather daily.I went out for a couple of hours, mainly around the two towns closest to where I live. A pic of the new bike as I was enjoying a cup of joe: 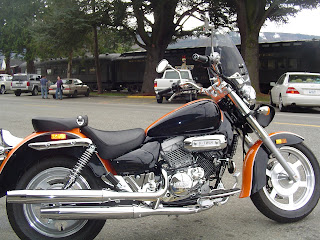 Another one, as the rain clouds start rolling in: 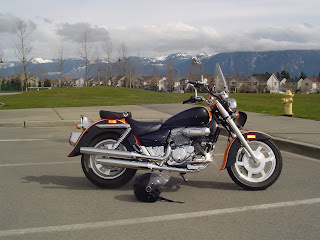 Here in the Northwest, when a riding opportunity is at hand, it must be seized!
Take care. 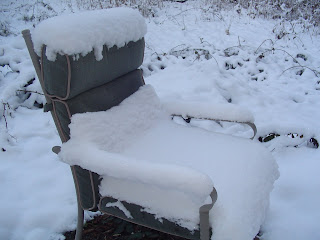 Not really...we got more snow on Thursday, and more is planned for this weekend. Oh bother... 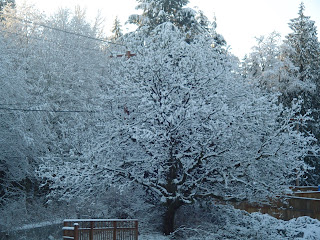 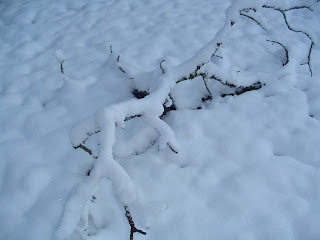 I hope your weather is nice, whether you ride or not!
Posted by Lance at 8:28 AM 15 comments: