Today I rode into work. A bit cold in the morning, and very windy along the I-90 corridor, but it was nice to commute into Seattle on the Triumph. Rain was forecast for the afternoon, but for the most part I was dry on the return trip.

On the way home, I decided to stop in at I-90 Motorsports. This is the place where I bought my Bonneville America. I like this shop - it's pretty low key there, the sales guys are helpful even if you are not buying a bike that day, and they have a nice stock of Triumphs, Hondas, and V-Stars/Yamahas in addition to selling ATV's and personal watercraft.
Why did I stop there? I think it's always cool to look at bikes, sit on them, see how they feel. Maybe there's a bike here that I will say to myself "I should have gotten this one" instead of my Bonneville America.
In one of the recesses of my mind, I think about having a full-fledged bagger; I like the idea of a long distance cruiser, with a lot of comfort, torque, low rpms, and storage to spare. How about rolling into Sturgis on one of these, the Triumph Rocket III? 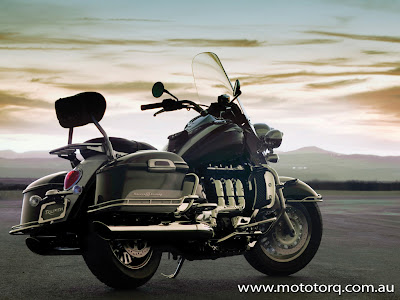 This bike is the king of displacement - 2300 cc, and fully set up for long distance cruising. The Rocket III is a beautiful bike. Could it replace my Bonneville America? Well, I got on it, and found it to be massive! I am short of leg, and while the seat height is rather low, due to the width of the 3 cylinder engine on this bike I end up on the balls of my feet when I straddle it. Because of the sheer weight of this bike I think it needs a longer-legged rider than me to keep this one stable at stops and low-speed maneuvers.
Next up was the V-Star 1300 - another very nice bike, in a trim that is ready for some long excursions on the interstate: 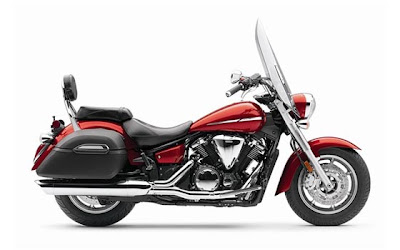 Unlike the Rocket III, I had less of a problem straddling the V-Star. The bike certainly has ample power, and I have heard much about the quality of the Stars. Maybe I should trade in my Triumph for this bike? Actually, though, if anything I felt a little big on this bike. I seemed to be seated right over the tank, and positioned almost over the handlebars. Also, I had a problem catching my leg on the pillion back rest - I guess I should stretch more often. In any event, this was not as comfortable as I would have hoped.
How about I get some tattoos, some well-placed piercings, change my name to Spike and join the chopper set? It could happen on this Honda Fury: 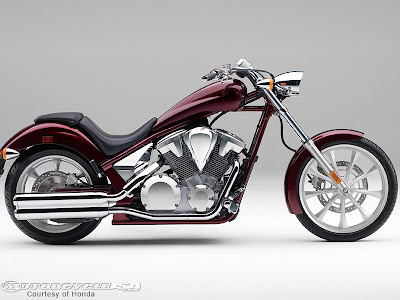 Of the three, the Fury was the most comfortable. The bike is not as wide as the others, so it was very easy for me to throw a leg over this one. Once seated, the ergonomics of this bike proved to me that Honda really thought this one through, and I have experienced first hand the legendary quality of Honda. I could be the bad boy I have always dreamed of with the Fury, so should this bad boy in waiting trade his America in? Unfortunately, while the Honda looks like the real deal, it does have a lot of plastic on it. Also, even though it's powered by a 1300cc engine, some reports show it generates just 56hp stock. That's less than my America (due to the upgraded pipes and Stage 1 treatment).
I left the shop, got on my America, and basked in the comfort of this bike as I waited for the engine to warm up a bit. My feet reach the ground comfortably, the seat has formed nicely to me, I really like the forward controls, and the handlebars offer a natural reach. For me, this bike just fits right. As I merged back onto I-90, I was reminded once again of the incredible torque band of this bike; not break neck, but enough to make me smile. It's got more than enough power for me, and plenty to spare. While that Fury or a full-dress bagger may make its way into my garage someday, I really can't see them as replacing this bike.
Posted by Lance at 7:38 PM 23 comments:

Martin Luther King Day brought some surprisingly beautiful weather to North Bend. Despite the forecast of rain, the sun was peaking through the clouds, so I got on the Triumph. But first, it was time to accessorize my bike. I bought from another member of the Bonneville America forum (http://www.bonnevilleamerica.com/) a fender bib in a chromed flame design, since I recently converted the Triumph to a solo ride. From E-bay I got this nice leather tool bag that is Triumph-embossed. 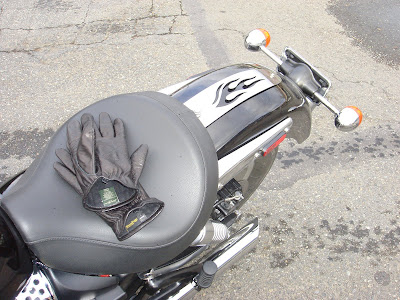 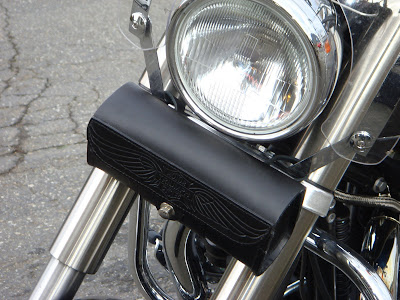 I really like these - the bib gives a nice look to the rear fender, and the tool bag can hold my wallet, cell-phone, camera, and yes, some tools.
With the installation of these items complete, I decided to ride to Hobart this morning. Hobart is a rural community about 20 miles from North Bend. It's quite a small town, with a population of around 6,700. The residents are spread out on 18 square miles.
To get there, I travel south on Highway 18, over Tiger Mountain (elevation 1,375 feet at the pass), and then east on the Issaquah-Hobart Road. The Issaquah-Hobart Road is perfect for cruising, with speed limits varying between 40-50 mph, and some nice, lazy curves.
I stop by the local ballfield to take a couple of pictures: 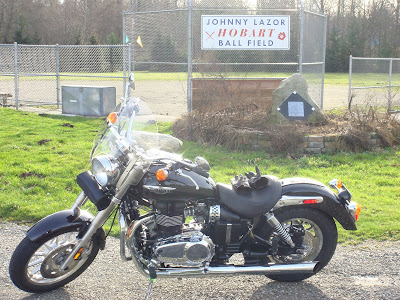 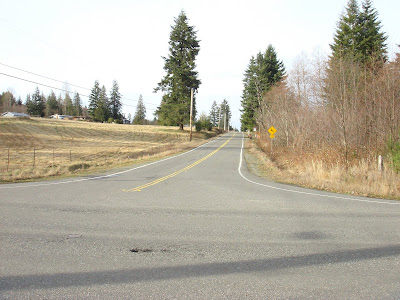 The main store in the area is the Hobart Market, which is a small place with a gas station, video rentals, and basic food provisions. The Market also houses the town Post Office, which was established in 1903. Being the only market around, it served as a meeting place for many of the residents. Everyone seemed to know each other, as they were called by name by the lady clerk of the store; me, I was just called "honey." One of the shoppers stopped to talk with me about my Triumph, recalling the times when he and his Dad owned Triumph and Jaguar automobiles. 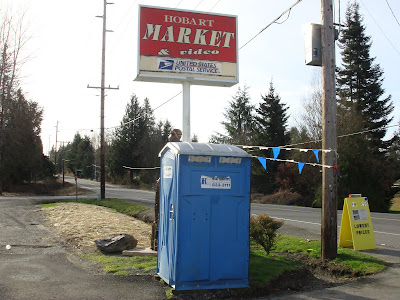 I didn't have to use the restroom while there, but if I needed to I know where to find it!

I got some coffee and snacks, saving these sprinkled cupcakes for my wife - I had never seen this brand before - we will have to see if Mrs. Freshley is the baker her name promises! 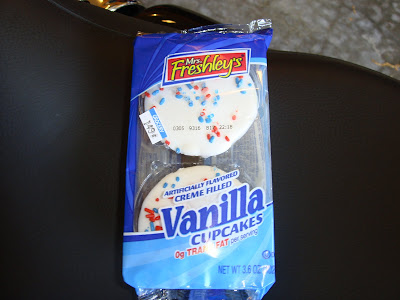 Jobs I am Not Qualified For 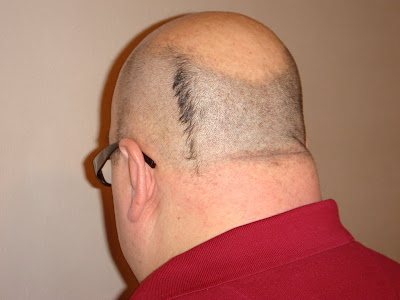 There are probably a few, but one job I know that I am definitely not qualified for is a barber. This morning, I decided to give myself a haircut. I don't have a lot of hair, and thus styling options, so it doesn't make sense to pay a barber $15 for what I can do in 2 minutes.
As you can see, I should have had my wife inspect my coiffure before I left the house. Luckily, I was wearing a hat when I was on the bus. When I got into the office, our Administrative Assistant informed me of the ill-placed stripe down one side of my head. One kind colleague said it looked like I had planned it. Another thought it looked like the time they didn't overlap their wheels when mowing the lawn.
Posted by Lance at 7:52 PM 16 comments: 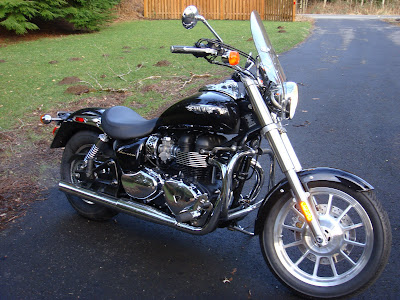 Today was my first ride of 2010. I don't think I will winterize the Triumph; instead, I will make an effort to get out as much as is practical (and safe) during the winter months, or at least start the bike up regularly. The weather service here forecasts a 1 1/2 day window of clear weather before the rains kick in again - Wednesday afternoon and all day Thursday are expected to be dry and partly sunny. So, I made arrangements at the office to take this afternoon and tomorrow off.
I've lately been considering changing the look of the Triumph. I don't really use the pillion (rear) seat, since my wife is neither a rider nor a passenger. Plus, I like the solo look - it gives off the "bad boy" image that I exude, and tells the world "no passengers allowed" on this ride! Seriously, I do like the look of bikes with solo seats, such as the Harley 1200cc Nightster (a bike I almost purchased) and bikes from the "bobber" genre. 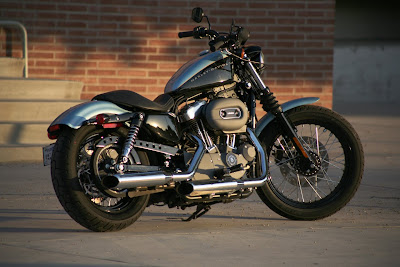 Above, a very cool looking Harley Nightster. Below, Triumphs lend themselves nicely to the bobber look (both photos from the internet): 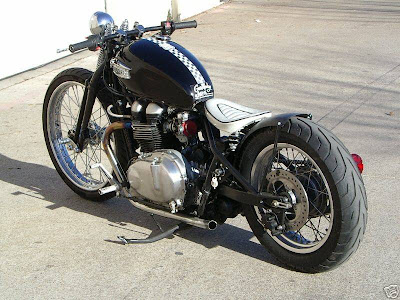 Going solo on the Bonneville America is quite easy - all I did was remove one bolt in the back, pushed the pillion forward and up and it was off. I can buy finisher bolts that are a bit more classy than the existing bolt for the seat, or even add a small rack or fender bib: 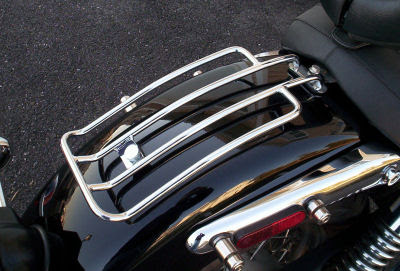 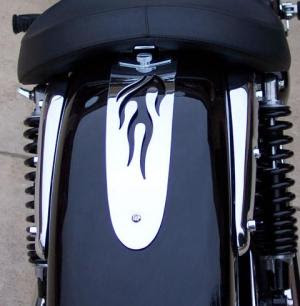 Above photos from Newbonneville.com.
The great thing is that I can convert back to 2 up riding quickly by just bolting the pillion back on. As you have probably noticed, I can't change the style of my hair, but at least I can change the style of my motorcycle.
I will be finally installing some saddlebags (I will report on this soon in a future post), so I will have to see how the bags work with the new look.
I decided to ride into town and see if the new seating arrangement is comfortable, and it is, although I can tell I used the pillion as a mini backrest to plant my backside. But I do like the new look!
Posted by Lance at 7:29 PM 75 comments: