This evening in the foothills of North Bend...hail. Small hailstones, but lots of them, with thunder and lightning. And it's not even November. 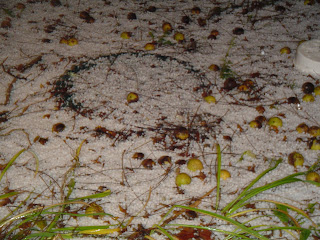 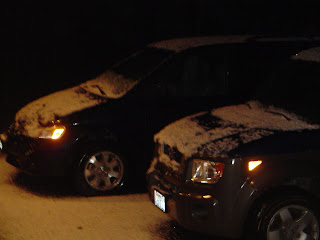 Now, back to your regularly scheduled programming. 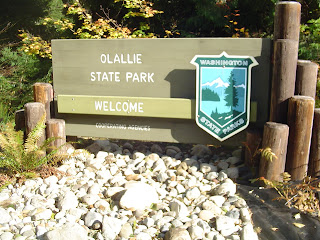 As you head east from North Bend, I-90 starts to climb eventually up to the summit of Snoqualmie Pass (el. 3,022 feet), located about 20 miles from North Bend. Today, there's a respite from the rain, and other than trying to avoid the wet leaves on the local roads, it's a nice day for a ride. After a late-morning cup of coffee at Huxdotter's, I merge onto I-90 for about 8 miles to the exit for Olallie State Park. It's a great opportunity for me to exercise the Triumph, enjoy the outside, and take a few pictures. I park my bike in the main (and only) lot of the park - there's one other vehicle there, a young family whose little boy is fascinated with the Triumph, and an 18-wheeler parked off the main road, probably getting some rest as he or she makes their way across the Pass. 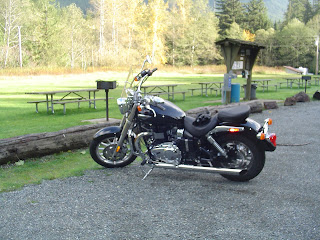 A little information about the park - Olallie State Park is a day-use park in the foothills of the Cascade Mountains. You can hike to Twin Falls from the park, see cliff formations that are used by the local climbers (see picture below), access the Snoqualmie River, and see living old-growth trees up to 14 feet in diameter. "Olallie" means "berry" in the native Chinook language, and there are a lot of berries here of various types here. 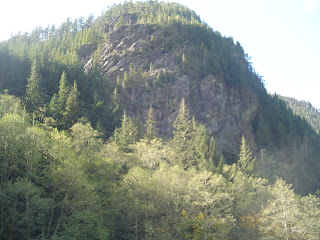 It's a great park for having a picnic, with a number of tables and cook stands. There are a number of tributaries that come down from the mountain and feed in to the Snoqualmie river. There's also a lucky park ranger who gets to live amongst this beauty. 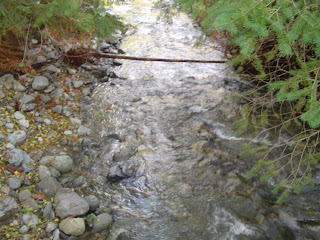 The nice thing is that this park is a short trip for me, close to town but a world away; as the clouds start to roll in and the batteries in my camera start to fade, I let my Triumph exert itself on the I-90 trip back home.
Posted by Lance at 12:42 PM 18 comments: 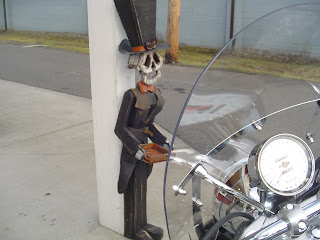 As is my custom during the weekend, I have a regular appointment with the couch. The constant rain last weekend kept me inside for the most part, and after a few chores and lunch, I am ready for my nap. The cat joins me, and we both fall asleep...to sleep, perchance to dream?
I am awakened by sunshine filtering in through the front door. I get up and notice the rains have stopped and the roads have dried up quite a bit, so I seize on an opportunity to get out on the Triumph; opportunities such as these are becoming fewer and farther between as we get into Fall. I head into town.
I take the long road into Snoqualmie, and stop by the local espresso stand. I am greeted by this somewhat scary, yet smartly dressed, character. 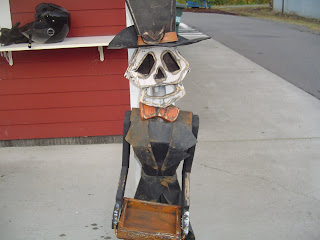 The owners of this stand have decorated the place in a rather macabre style. 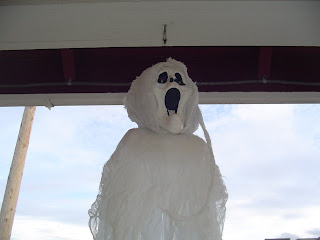 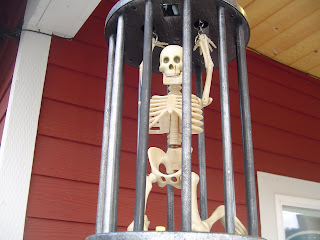 After an Italian soda here, I decide that the goal of the day is to research the Halloween decorations as used by espresso stands in the valley.
Heading back to North Bend, I stop by Huxdotter's for another Italian soda (important research such as this costs money), and take a few pictures. The owner here really decorates well for the holidays, with various lights, sounds and sights. The motif here is harvest/Halloween - I don't know where she got these pumpkins, but they are huge: 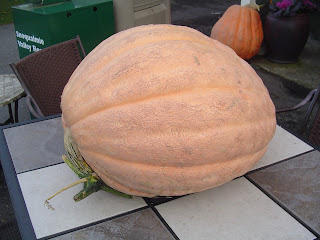 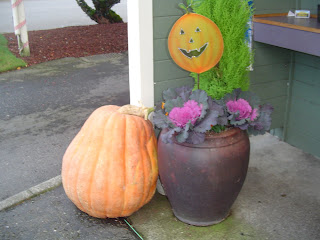 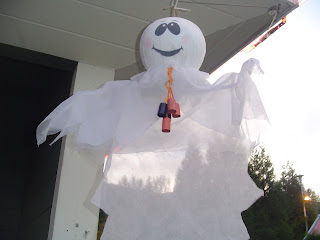 And out in the landscaping, an Edward Munch-inspired ghost: 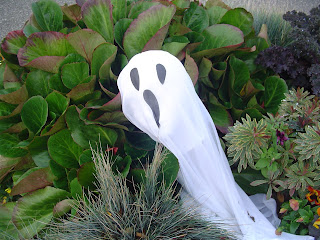 Fall has been very nice in the Seattle area; for the most part we've had sunny weather, with cooler temperatures (high 50's - low 60's F). Because of this, I am extending my commuting by motorcycle. Commuting by motorcycle = daughter gets the car, so it works out quite well.

The mornings are chilly, so I have switched back to my leather jacket - it's amazing the insulating properties of leather. Unfortunately, I don't have any leather pants, chaps or any other type of insulated pants, so my commute last Monday morning was a bit uncomfortable for my legs. A temporary fix has been to wear a pair of my baggiest jeans over my work slacks, which keeps me pretty warm. I have a pair of Olympia gauntlet gloves which are insulated and are made with a wind-resistant fabric. I've also ordered one of these from Calmoto.com: 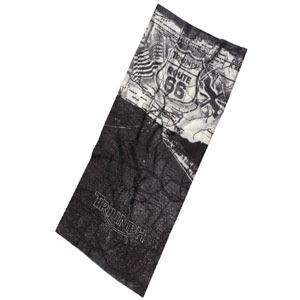 It's called a Buff, and apparently you can figure out at least 12 ways to use this on your body; I have found just one - you can wear this around your neck like a scarf, and even place it over your mouth to keep your face warm, and that's what I got this for.

I've been alternating between the fast commute, which means mostly freeway driving, and the more leisurely commute, with less interstate and more backroads. I prefer the latter, as it is much more interesting and scenic. Because of the length of my commute I have been able to put some serious mileage on my Triumph (I just went over 2000 miles and I have had the bike for about a month and a half). The Bonneville America just gets better and better as I add on the miles, and I am very happy with my choice of motorcycles.
If you live east of Seattle, aka the "Eastside" by the locals, you will eventually cross one of the three floating bridges that cross Lake Washington. And, if you take I-90 to get to Seattle as I do, you have your choice of two of those three; the I-90 Floating Bridge (officially known as the Lacey V. Murrow Memorial Bridge) or the "Third" Lake Washington Floating Bridge (the Homer M. Hadley Memorial Bridge). 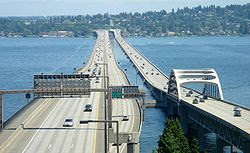 I don't know who took this picture, but it's a nice one, showing the Homer Hadley on the left, Lacey Murrow on the right, looking towards the east.

Some interesting tidbits about our floating bridges. As I noted, there are three that cross Lake Washington. The one that spans the north part of Lake Washington is called the Evergreen Point or the Governor Albert D. Rosselini Floating Bridge. As you go south, there is the Homer M. Hadley Memorial Floating Bridge, and then the Lacey V. Murrow Floating Bridge. We have another floating bridge in Washington State as well - the Hood Canal Floating Bridge which crosses into the Olympic Peninsula. Depending on the source, these bridges are ranked in the top 5 of the longest floating bridges in the world. The Lacey V. Murrow Memorial Bridge has had an interesting history - during the Thanksgiving weekend of 1990 a large storm filled some of the concrete pontoons that float the bridge with massive amounts rain and lake water - yes, concrete can float - the physicists tell me it's all about displacement. On November 24, workers noticed that the bridge was about to sink, and started pumping out some of the pontoons. But too little, too late, and on November 25, 2,790 ft of the bridge sank. The bridge sank when one pontoon filled and dragged the rest down because they were cabled together and there was no way to separate the sections. Fortunately, no one was hurt or killed, since the bridge was closed for renovation and the sinking took some time. This was captured on film - here is some footage:

http://www.youtube.com/watch?v=gm0YQ3vuyyY
Once I cross the bridge, I am nearly in Downtown Seattle. I've had to alter my commute on the streets of downtown - more on that later.