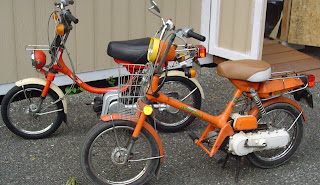 The Elite is still in the shop - in addition to a tune up, her automatic choke is not working, so it's taking some extra time to get parts, etc. for that, so I've been riding one of my mopeds, the orange one shown above (a 1978 Honda NC50 Express). 50cc, so it's more of my "get the mail at the end of the drive" ride, but she is fun to ride. Starts after the third or fourth "kick" - actually, this isn't a kick start, but a "winder" start. You crank what looks like a kick start lever 3-4 times, and it winds up a spring inside the starter. Then, you press the rear brake lever, which releases the spring and it starts the engine. Kind of a poor man's kick start, but it works pretty well.

When I got her last year, it needed new brake pads, tires and a new seat cover. The first two items were left to my mechanic, and I bought a new replacement seat cover that is exactly like the original off ebay. The gentleman who sells these is from BC Canada, and does a great job of recreating seat covers for vintage bikes/scooters. I've bought several from him.

I call this a moped, but some will say that she is actually a "noped" since the pedals are merely footpegs and are not pedalled like a traditional moped. Whatever you want to call her, she is a real fun ride, and a good looker to boot!
Posted by Lance at 9:36 PM 57 comments: 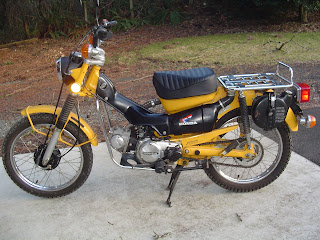 Before there were quads and ATV's, there were the "trail" bikes, and one of the best was Honda's CT90, or Trail 90. These were offered from 1967 - 1979. Honda targeted hunters, fishermen and outdoorsmen with the Trail 90. Early ads often featured these bikes in wilderness settings, and they were very well suited for narrow trails, being small, lightweight (around 188 pounds) and with a forgiving suspension. Some models had a set of low gears that required you to change the chain from one sprocket to another; later models had a hi/low switch. It was ideal for climbing and carrying packs, and I have heard stories of hunters carrying elk and deer off the mountain with these bikes.
While targeted for off-road uses, this was not a "dirt bike" in the conventional sense. They could easily be made street legal and had a top speed in road gear of around 55mph. Fuel economy was excellent, often around 100mpg. In local commuter traffic, they were extremely maneuverable. Later models were equipped with 110cc engines - in Australia, these bikes were used in the postal service, gaining the name "posties."

Many new riders were introduced to motorcycling by the Honda CT90 - they were light, easy to maneuver, and had clutchless shifting.

Last year I purchased the above bike (a 1978 model) from a gentleman who used these bikes to get back and forth around his cabin property. I loved the way this bike worked - in lo gear this bike could literally climb a tree, yet it could be used to run errands in town. I am glad I had a chance to enjoy this bike, but alas, the garage is getting full, so I have put this one up for sale. However, this bike runs great, and is a testament to Honda quality, and will be enjoyed by others after me.