Having bought my scooter in late summer of 2007, I had intentions of taking my written test for my motorcycle endorsement in WA state, then practicing on the scooter, then taking my road test sometime thereafter, hopefully in early 2008. Well, it is now May 2008, and I haven't done any of the above. So, after talking with a colleague of mine who completed the Motorcycle Training Safety Course (MTSC) , I went ahead and signed up for the class. The Evergreen Safety Council (the organization that puts on the MTSC) recently started offering "scooter only" classes - you get the same Motorcycle Endorsement, but you get to ride on scooters to take the class, which made a lot of sense to me. The class involved about 7 hours of class instruction, and about 15 hours of "range" exercises at one of the Boeing parking lots. It was a great class, with excellent teachers who really wanted you to succeed at riding. You start out just straddling the scooter, then walking with the scooter without power, then walking under power, and pretty soon you are riding around cones, going over obstacles, practicing emergency stops and slow speed tight maneuvers. You take a written test on the rules of the road, and on the last day you take the skills test, and you need to get at least an 80% on both tests to pass. While I did extremely well on the written test, I had a few problems with the skills test, but I passed both. What a relief! Now, I was an official scooterist. However, it would be a couple of more weeks before I could ride my scooter.
Posted by Lance at 8:54 PM 1 comment: 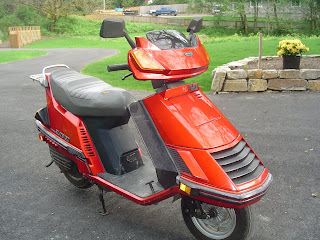 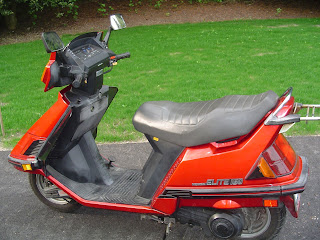 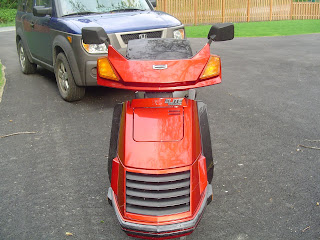 Somehow, I got bit by the scooter bug...bad. I gotta a fever, and the only prescription is more scooter! So, I had been on the hunt for a scooter for some time. I looked at some new Vespas and Lambrettas but they were quite expensive. I saw the ebay ads for scooters for $799, but I had heard a lot of stories about these lesser quality scooters that basically fell apart after 300 miles. I wanted something not too expensive but also was a quality make. Around the end of the summer of 2007, I was browsing through the motorcycle/scooter section of Craigslist and saw an ad from a gentleman not too far from me who had a 1986 Honda Elite 150 Deluxe scooter for sale. This scooter had 22,000 miles on the odometer. He was the second owner, who used the scooter for recreational use, such as at the campsite, and he told me the first owner used it as a true commuter bike, explaining the high miles. The scooter was in really good shape cosmetically, a few scratches here and there, but nothing that bad. He started it up and rode a couple of times down his block (he had to test drive it on my behalf, as I had never set foot on a scooter). I bought it, and for a little extra he and his son brought it home for me. So this was the start of my relationship with this scooter. However, the scooter would have to wait another 8 months before I would begin riding.