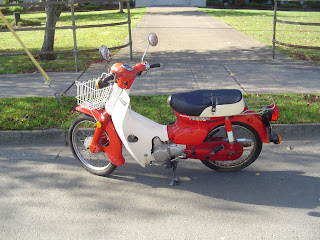 Growing up in Hawaii, I remember seeing these small step-through motorcycles from Honda, that came with the ad "the nifty, thrifty, Honda 50." It was called the Honda Cub, with other variations as the Supercub and the Passport, a 70cc model.
The impression that those bikes left on me had an up swell this year. I started to research these bikes online, and found out that they are still sold (but not in the US). Honda celebrated 60 million in sales of the Cub in 2008, a remarkable feat. It was also named by the Discovery Channel as the "greatest bike of all time."

James May with the Telegraph recently wrote a nice testimonial to the Cub, and the genius behind this "people's motorcycle."

While you might not be able to purchase a new one in the US, there are a few used ones up for sale on ebay or craigslist, which can range from very, very used to near pristine condition, with the price adjusting accordingly. I happened to be talking with a colleague at the office about my interest in a Passport, and she told me that her Dad was the original owner of a local Honda dealer in Seattle, and that she remembered him having a 1982 Honda Passport on his boat, with the bike now owned by her sister. I contacted her sister, and asked about the Passport, and she mentioned that she had been thinking about selling it. I asked her to please consider me, as I was a Honda fan (see my earlier post that proves this).

A few weeks passed and I hadn't heard from her - in the meantime I purchased a 1978 Honda CT90 (I was inspired by a blog entry from Kano where he reminisced about that bike in his life - more on this one in a future post). Then, I got an e-mail from her saying that she had talked to her Dad, and that they agreed I would make a great owner of the Passport!

When I came to pick her up, she was in great working condition, starting right up for me. It's what I would call a "semi-automatic" in that you have to shift gears, but there is no clutch lever. It was very quiet - the engine has such a soft tone to it. Cosmetically, there was rust from being on a boat, the leg fairing was cracked in several places, and the seat cover and basket needed to be replaced. But, she looked beautiful to me, and I brought her home.

Over the summer I repaired the cracked fairing with superglue and white caulk, replaced the seat cover, started removing rust from the chrome tailpipe, replaced the shopping basket, and changed the oil.

Since I live in a pretty hilly area, 70cc's won't allow me to keep up with traffic (both the motorized and walking varieties!), so I trailer it to town and ride it around on the flatlands. She gets a lot of looks, and I end up meeting many people, young and old, who had great memories of their times with this bike. 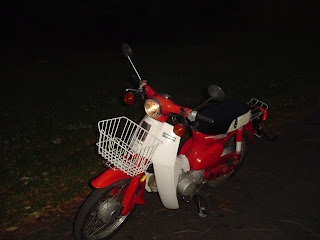 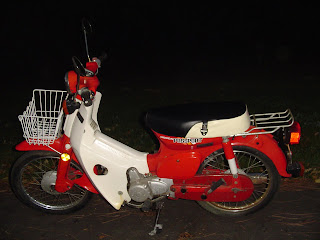 Being a new rider, this is my first fall on the scooter. I really enjoyed the warmth of summer, and while my riding time has been cut somewhat due to the weather, there are still ample opportunities to ride here. Riding in the fall is great - the coolness of the air makes me thankful that I have a leather jacket, and reminds me that I need to get a better pair of riding pants.
The colors are very nice around here - I was born on the east coast, and have some remembrance of the vibrancy of fall there, and while the evergreens here in Washington state do not offer the intense contrast of fall, there is still much that turns to show that autumn has arrived. 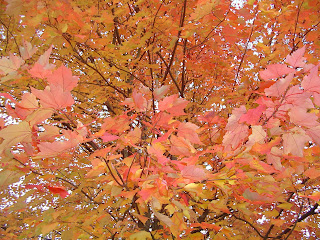 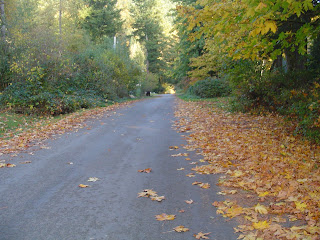 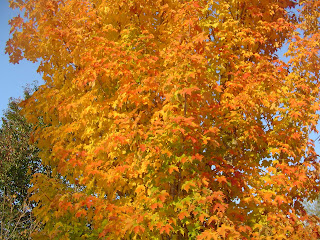 We lose daylight by the day, so my coffee stop gains added importance with the chill of the afternoon. 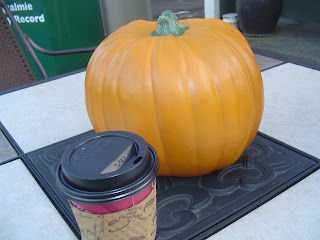 I took Friday off, and after running some errands, and after the day warmed up a bit (we've been having frost in the mornings as of late), I took the Elite out for a ride into town. Probably the most significant natural landmark of North Bend is Mount Si (as in sigh): 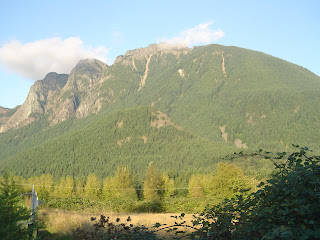 Mount Si stands at 4,167 ft (1,270 m). The mountain was named after Josiah Merritt, an early settler. It figures prominently in the show Twin Peaks, and is a popular hiking destination, getting between 80,000-100,000 climbers annually. Due to its terrain, especially towards the top, Mount Si is used as a training hike for those planning to ascend Mount Rainier (the highest peak in the Cascade Range, at just over 14,400 feet).

When you're this popular, people want to name things after you: 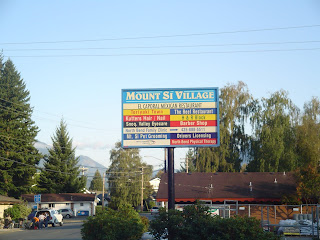 The local high school, several doctors, dentists, and businesses all take on the name of Mount Si. I've even heard of a couple of weddings done at the top of the mountain.

This is about as close as I can get on a scooter, however, which is fine by me: 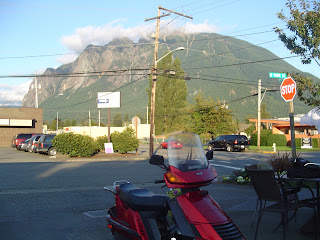 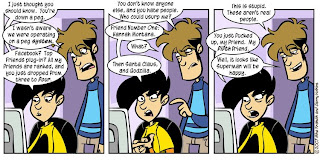 I am a fairly new blogger, and it's been great getting to know other people with interests that are similar to mine. I've gotten the chance to get a glimpse into the lives of people from different parts of the country, and even the world. On the right hand side of my blog is a list that I call "My Friends' Blogs" and I really do feel that these folks are my friends - they're a great bunch of scooterists and motorcyclists!
I asked my kids (one is on Facebook and the other is on MySpace) how many online "friends" they have - one said 160, the other said 300 - I was assured that all of them are known personally, or at the very least they were a known friend of a friend. I'll have to get them to define what "known personally" means, as I would think that managing 160, let alone 300 friendships would be pretty tough.
The internet has certainly changed how one makes friends - the fancy name is "social networking" but the concepts are the same. As with friends in the flesh, some are pretty selective in who they allow into their lives online; indeed, there is a dark side to online relationships, and caution is prudent. Others are "collectors" trying to amass as many friends as possible on their MySpace or Facebook page to show how popular they are. It's even got to the point where some of the well-heeled have hired assistants to manage their online friends, as in this article from the BBC:
http://news.bbc.co.uk/2/hi/technology/6260210.stm
Rest assured that I am the actual me typing this, and I am glad to meet you - thanks for being a friend on this ride!
Posted by Lance at 7:00 PM 2 comments:

The Times They Are a-Changin' 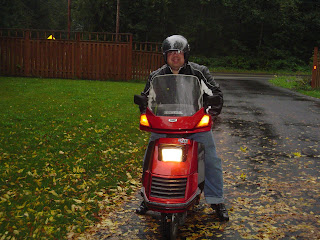 While we have had a great summer in western Washington with plenty of sunny weather to ride, I can really sense the change in seasons here. Fall has come pretty decisively to North Bend, bringing leaves, cooler and wetter weather. It looks like I won't be able to assume that I can ride on any given day, like I could for much of the summer. I guess that means I will just need to grab those opportunities when they come, which will make me all the more thankful for the times I can ride.
Posted by Lance at 8:09 PM 5 comments: