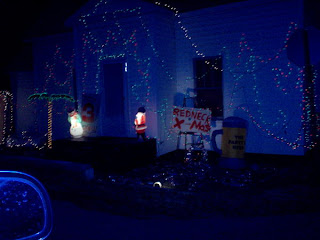 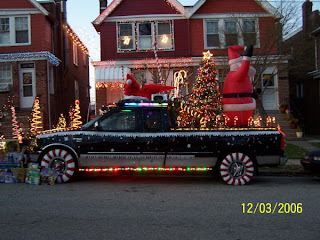 I've been getting into the habit of taking an afternoon nap on Saturday and Sunday, which is highly recommended! I got up at 4pm and decided to go into town, return some library items, pick up some groceries, before it got dark.

It's been very windy - with our proximity to Snoqualmie Pass, the Pass creates a funnel and forces the winds from east to west. Oftentimes, it's a warm wind, but with the approaching snow in the mountains, it's pretty cold. Plus it's very blustery, so I was getting beaten up a bit on the Elite, but we held our own.
The stores in town already have their Christmas items stocked, the tree lots in grocery stores already have trees, and some people are already buying them! There are at least two houses in town that already have lights up. While I love the holiday season, it seems like we are in more and more of a rush to start the materialistic part of the holidays; I heard Costco started selling holiday items in August!
North Bend is Christmas Tree Town Washington State, so the tree farms have begun their advertising. 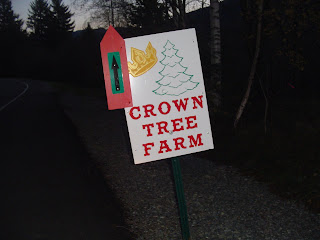 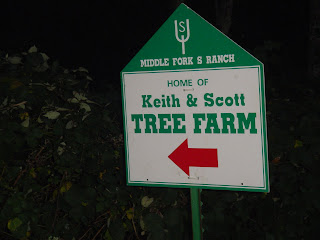 The King, Keith and Scott are all ready for what is hopefully a busy season of selling Christmas trees.
But the cat is like me...not quite into the holiday spirit yet. 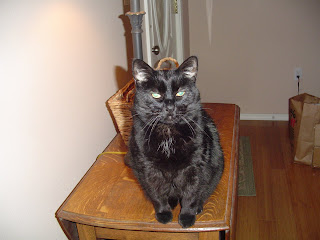 Wth next week being Thanksgiving, my best wishes to you all!
Posted by Lance at 4:46 PM 3 comments: 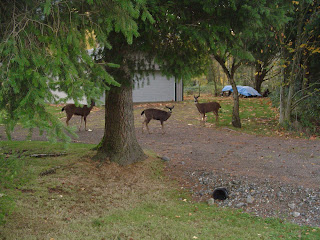 The forecast is for dry weather for the next 3-4 days, so this Saturday morning I took the Elite for a ride into town to see how everything is getting back to normal. On my way into town, I came upon this small family of deer. 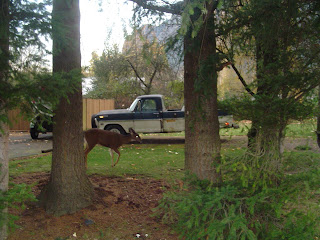 Downtown North Bend didn't get much in the way of flooding - Huxdotter's was serving espresso during the rains and wind. It's sunny and fairly warm (~50 degrees F), so I am taking my coffee "alfresco" this morning. 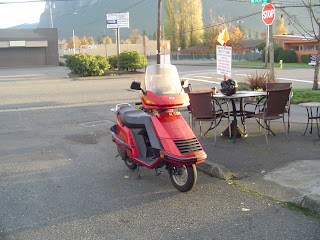 A view of Rattlesnake Ridge from Huxdotter's (fortunately there's no rattlesnakes in this part of the state). 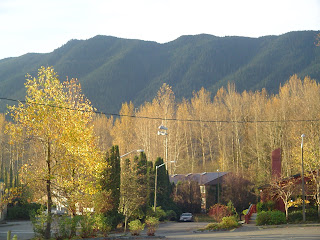 5 minutes away by scooter is Snoqualmie - they are down river from North Bend, so there was significant flooding there - some roads are still closed. 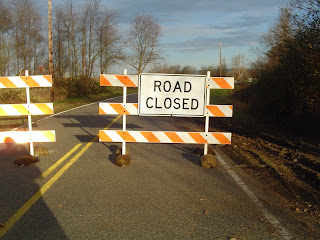 These next pictures are of the school district building in Snoqualmie. A couple of days ago this place was sandbagged, and the buses were moved to higher ground. Today, the sandbags are gone, and it looks like the building fared pretty well. 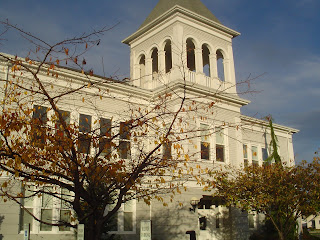 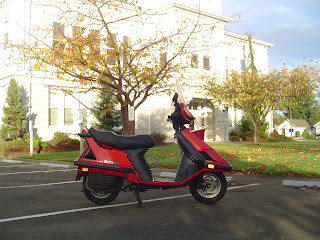 A couple of blocks away, the neighborhood looks like it's pretty much back to normal, with the exception of someones alternative means of transportation during the flood. 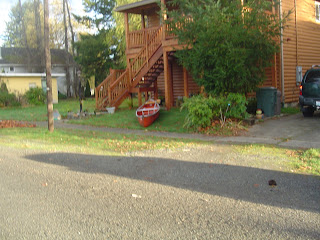 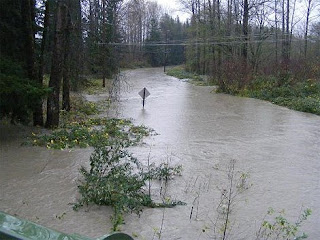 Lots of rain here. Schools were closed yesterday. The Snoqualmie River crested at around 10:30pm last night, so it will be interesting to see what North Bend looks like this morning.

If you saw my post on Snoqualmie Falls, check out this video taken yesterday by the local news - pretty awesome sight, with the water crashing over the falls, taking logs down as if they were twigs!

I Need To Go On A Low-Carb Diet 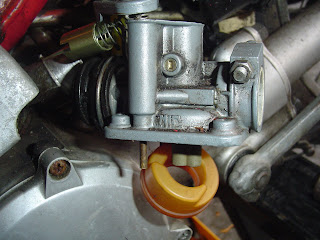 With the heavy rain we have been having as of late (today, the Snoqualmie River has flooded several towns near me), I haven't been able to ride much. I've been starting the Elite and the other mopeds every couple of days, just to keep them warmed up. I was thinking about sending one of the mopeds (a 1982 Yamahopper QT50) to the shop to clean and repair the carburetor - in the forums this appears to be the major reason why these older mopeds won't start/won't run. I even saw one post declare that these carbs are the easiest to take apart and clean. I didn't really want to spend $50-$100 for someone else to do this, so I said to myself, "I can do this!" I shouldn't have listened.

It was fairly easy to take the carb apart - a few screws needed to be loosened, a couple of clamps removed, and the carburetor came off. I should have had a small bucket ready, as gas started dripping from the carb and the petcock (so, that's why there's an "off" position) onto the floor. Well, at least it smelled like a real man's garage now!

The hard part was putting it back together again. I should have taken more pictures, as in my excitement over successfully removing the carb, I went immediately to removing the jet, the float bowl, the float itself, and a few odd screws that seemed to have no known purpose to me. I bought some carb cleaner, gave everything a thorough cleaning, and I was ready to reassemble. While some parts obviously went back in certain places, I had forgotten where others went. So, back to the forums, where I got a diagram of the carburetor and was able to locate all but one odd piece that doesn't seem to be mentioned in the diagram.

I have an order in with the local Honda/Yamaha dealer for some replacement parts, which will take a week or so. Hopefully I can get the new parts installed and get the Yamahopper running real soon - if so, it was a great learning experience; if not, I'm thinking my next bike will be fuel injected!
Posted by Lance at 7:12 PM 1 comment: