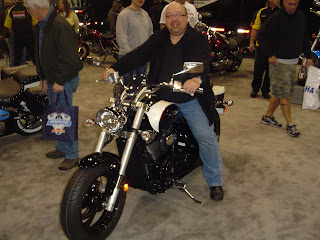 The International Motorcycle Show made its way into Seattle this weekend, and today I took my son to join me as official blog photographer of the event. The event is being held at Qwest Events Center, which is adjacent to where the Seahawks play (although some will question whether the Seahawks are actually "playing" this year).
It seems that many did not take advantage of on-line ticket sales, as there was a large line waiting to get in, which my son and I were in until I spotted the e-ticket holder line which was deserted. Having purchased our tickets for $1 off on-line just before we left for Seattle, we moved to that line, and we were in. We were greeted by the "Progressive Girls" who gave us swag bags, and off we were to view the 2-wheeled offerings for 2008/2009. 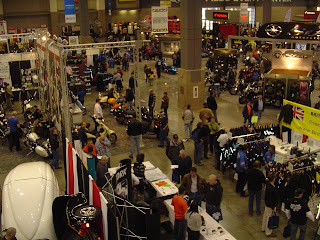 Our first stop was to see the VME (Vintage Motorcycle Enthusiasts). The VME had three displays of older bikes, most organized by area (Japanese, British, Italian). I am a fan of the older Hondas, and there were some very fine examples here: 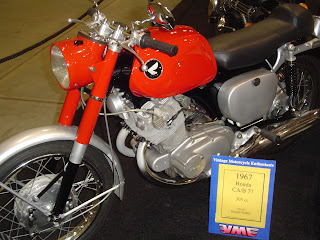 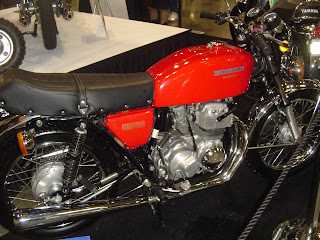 Being of the short-legged variety, I've been somewhat afraid to kick my leg over a motorcycle, for fear of tipping over, but I can straddle the cruiser-style bikes quite easily. 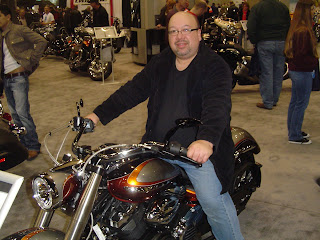 The Ural display was very nice: 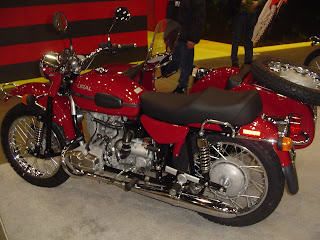 The Scooter Pavilion made its appearance in Seattle - I guess this was so easy, even a caveman could do it, as the Pavilion was sponsored by GEICO. I admit to really enjoying the commercials, and the Ad with the hipster/passive aggressive cavemen dismounting their bikes and approaching some beautiful girls, only to turn back to their bikes when they see the condescending GEICO billboard Ad is very funny. There wasn't much in the Scooter Pavilion that wasn't already being displayed by Honda, Yamaha, Vespa/Piaggio or Kymco in their corporate displays on the main floor, but it was a great opportunity to focus solely on scooters. Here are a couple of pictures - a CF Moto CVT 250cc scooter/motorcycle and a favorite scooter of mine, the Kymco Xciting. 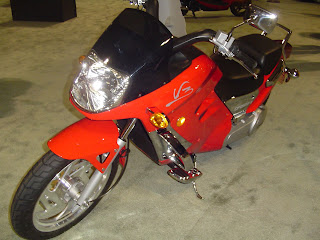 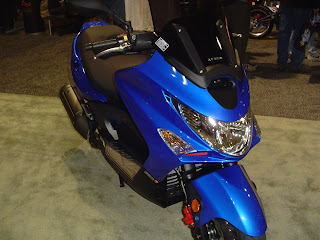 Speaking of Kymco, if I were to get a cruiser-style motorcycle, this would probably be the one - the Kymco Venox, which is a 250cc motorcycle that looks much bigger than that: 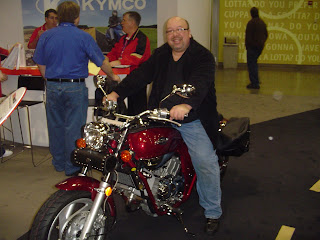 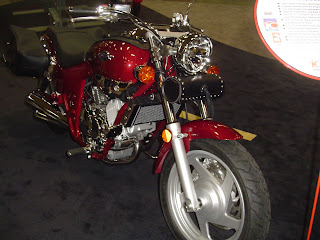 There was even a "car" on display - actually, not technically a car, as they tell me it is classified as a motorcycle, so you could ride this one-up in the carpool lanes around here. It's called an EMC3 Commuter (http://www.ecomotorcompany.com/) and is powered by a 1000cc Geely engine. Two wheels in the front, and one in the rear, it gets a reported 60+ mpg, and is freeway legal. Just under $15k for an automatic. 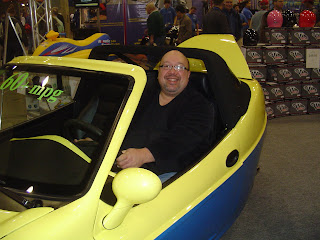 You look as though you were having fun, trying out all those bikes.

The EMC3 reminds me of the Isettas and Messerschmitts from the '50s. Probably a lot more comfortable though! In England you could drive a three wheeler on a motorbike licence. I doubt that's the case now.

Thanks for the highlights. I opted out of going. We were deep in snow and ice. It would have been my first time as I'm usually teaching that weekend. Looking back on it, was it worth the travel and admission price?

Thanks John - yes, it was fun to try the bikes, but not so fun to think how much I would be in debt if I were to buy them. I remember the Isetta - that was a great little car, with the door opening in the front. I see one every now and then on ebay.

Thanks Irondad - it cost $12 to get in, and about a 45 minute drive, which wasn't too bad, but I only spent about an hour and 15 minutes at the show. Overall, I am glad I went.