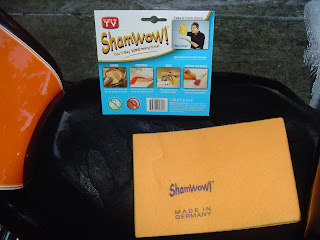 I'll admit it. I'm a sucker for infomercials. I remember the original Popeil Pocket Fisherman. I thought I couldn't live without the Snackmaster. I bought ForeverSharp knives one day during a demonstration at Safeway after the pitchman cut a aluminum can with one, and then sliced a tomato. I have the Bullet Magic Blender. As you can see, I have some experience with infomercial products.
Well, one day while shopping at the grocery store, I saw hanging from one of the shelves a two pack of ShamWow! towels. You know the commercial, with a guy by the name of Vince exhorting the cameraman to keep up with him as he extols the virtues of the towel. You find out that this is not just any towel, but a product of German engineering - "you know, the Germans always make good stuff" says Vince. The towel can be used wet or dry, it can prevent mold and mildew in your carpets, and it's for the home, the car, the boat, the RV.

At the grocery store, the price was $7.99 for two small ShamWow! towels. Not as good as the $19.99 special on the infomercial, but I thought, what can I lose?

I tried out one of the towels when I washed my motorcycle today. Apparently, these towels can hold 20 times their weight in liquid, so I used the towel to dry off the bike. It did seem to pick up a lot of water. I wrung it out just like Vince does in the commercial, and amazingly there was a lot of water that came off the towel. The problem, however, was that while the towel picked up a lot of water, it could never really dry the bike - the water just got pushed around the surface. I would need another towel to really dry the bike off.

Did I say Wow! after I tried a ShamWow! towel? Not really - it did OK, but I wouldn't say it was much better than a good cloth towel. In any event, I finished up washing her, and she looks very nice! 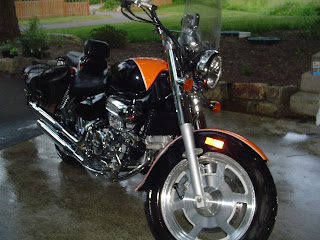 So it turned out to be just a Sham instead of a ShamWow? At least you are only out about $8. Thanks for the review. I had been thinking of buying some and trying them out myself.

Television is one of those wastelands where you can say what you want to as long as you have the money to pay for the commercials.
My question is did you ever buy any exercise equipment from Body by Jake? He always seemed to have the strangest looking gadgets, a new one every year or so, that would make us all look fit and trim and look like him.

Danny, thanks. ShamWow! was just ShamOK. Not worth the money IMO, compared to the usual soft cotton cloth. I guess I could consider it $8 worth of fun.

Jim, I agree. It's amazing the claims that are made. The one I like is for the Bullet Blender, they are talking over the sound of the blender giving the appearance that the machine is fairly quiet. That ain't the case with mine!

I would need all of Jake's equipment, plus Suzanne Sommers' ThighMaster, to look good!

Hey Guys, I got one and it works fine for me...maybe the American version is not as good as the Canadian version, eh...?
But seriously now, now you need to consider doing which is what I did..., get an air compressor from Costco or such, and after washing your bike, use the compressor, carefully and skilfully to get the bulk of the water off it...need to be careful not to blow the waterwhere it ain't suposed to go as much as possible, but if you do, don't worry, cause, remember you ride in worse conditions under the rain.
Once you've gone through this process, then dry the bike using whatever rags your heart desires...it will be fine... remember to keep it as dry as possible...and a little wax is always called for...can't hurt.
But then again, that's only my opinion... BTW, I got a compressor that cost under $ 200 and it works fine once I figured out all the plumbing...

My experience with the ShamWow was exactly the same - it pushed the water beads around on the surface without picking them up.

Today's project: trying to get my cloudy headlights clear again. Wish me luck!

Baron - by the other posts, it does appear that Canada gets a better ShamWow! No fair!

Joe - thanks. I may be going back to plain old cloth towels.

I watched a live demonstration at the Vancouver Auto Show; I wanted to see if the cola on the carpet thing was legit.

The guy poured a liter of brown soda on a square foot of carpet laying on the table. He then pulled it up to show the liquid underneath the carpet. As in the commercial he laid the ShamWow on the carpet without applying any pressure, and sure enough, was able to wring a considerable amount of liquid out of it. He then applied pressure and got a lot more liquid out of the carpet. Finally, he lifted the carpet up and sure enough, the table underneath it was dry. So I'm convinced it works as claimed in that situation.

Maybe what you need to do it set the ShamWow on the bike/car surface without wiping it... just lay it down, let it absorb, wring it out. Repeat in different areas as needed...

Orin and Baron - I think the Canadians get the real ShamWow!

I always mute Vince and Billy Mays. Now I'll feel much better about it!