This post is not about political mud-slinging...it's about the real kind of dirty laundry - mine. Our washing machine decided to give it up this week, and the cost to repair was so much that it made sense to get a new one. The new one won't be delivered until Tuesday, so Sunday morning I decided to go into town and do some laundry.

I could have used one of our cars to bring down the laundry, but one of the great things about scooters and motorcycles is that, in addition to being real fun to ride, they are pretty handy. So, I packed up a large trash bag with laundry, and with a few bungee cords, secured it to the Elite. 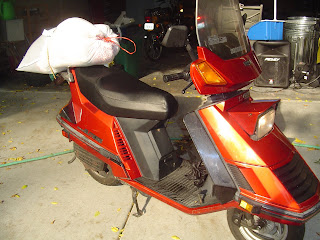 It's not as much of a load as this, but it proves that the Elite has definite capabilities as a pack mule.

Here we are at the local laundromat: 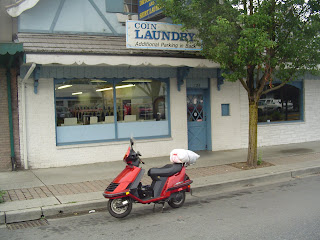 Between loads I was able to ride over to Huxdotter's to grab my Americano, and rode around town. When the clothes were all dry, I folded them, which made the bag even larger, so with a little more effort tieing everything down, I rode home. It was great not only to get a ride in, but also get some needed work done as well!
Posted by Lance at 9:58 PM

Wait until Christmas, then you can do what Steve Williams does every year, bringing home the Family Christmas tree on the Scooter.

You can go over to his site (Scooter in the Sticks if you don't know that already) and look at his posts around the holiday's, I'm sure that there are pictures there somewhere.

I like being able to use the scooter to do things that I'd not have thought I could do on one. A few days ago my mom called to see if I wanted some home grown tomatoes to freeze for the winter. I popped a milk crate type box onto the back of the scooter and away I went. I came home with a few dozen plump, juicy tomatoes and didn't so much as bruise a single one.

Now I've got to check out "Sticks" to find what Earl's talking about. I've got to see how Steve manages to haul a tree home unless it's a Charlie Brown kind.

LOL! I was thinking maybe you could've found a way to hang that wet laundry on your scooter and then putted around town until it got dry! ;)

Thanks guys - I'll definitely have to check out the Christmas tree delivery service by scooter! Kano, I should have thought about the drying option by scooter - that's a good one!

My wife was worried she would find some of mine (or worse, some of her) underwear on the way down to the cleaners!

Just this morning, during my commute, my thoughts were occupied by dry cleaning. As in, how do I get it home on the scooter. :)