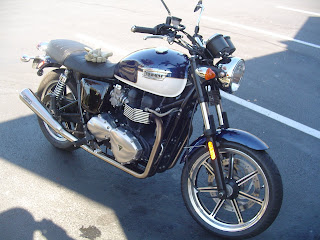 I had to bring in my America to the dealer (I-90 Motorsports in Issaquah) to replace a faulty tach (apparently a known item - there was a bad batch of them made, and a few of us got them), and to install my "dresser bars" (English for "crash guards" or "engine guards"). I love how Triumph describes parts like this - also, my exhaust pipes are called "silencers" (although I bought them because they were louder than my stock pipes). But I digress...
The work was going to take a little over 2 hours, so I stopped by the sales and parts area to see Don, the guy I bought my bike from. Don is a great guy, real passionate about Triumphs, and loves to have customers stop by and chat. When I came in, there were a couple of others there just talking about their rides for the week, and looking at the showroom bikes. Don asks me what I was doing, and after I told him what I was there for, he says "why don't you take one of the bikes and head out to lunch" - since it was lunch time, I accepted his kind offer, and he got one of their demo bikes out, a Bonneville SE. 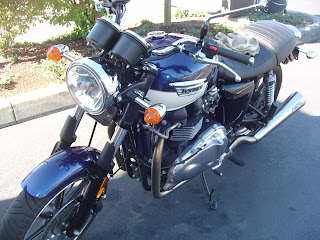 The Bonneville SE pays homage to the Bonnevilles of the past, and is part of Triumph's "Modern Classics" line of bikes. This line includes the Bonneville, Bonneville SE, Bonneville T100, Thruxton, and the Scrambler. Like my America, these bikes have the same 865cc engine, but the Modern Classics have a more retro look.
Don reminded me that Bonneville SE is lighter so it is quick handling, and has the traditional middle controls - my feet went to look for the forward controls, but there are none!
I take the Bonnie out of their parking lot, and immediately someone gives me the thumbs up on the bike - they are pretty cool looking! I head out onto I-90 and I am impressed with the quickness of the Bonnie; again, this is a lighter bike than my America and she really takes off. Since she is lighter, I notice getting knocked around in the wind a bit, but this is only in comparison to my America, plus this Bonneville did not have a windscreen. There was an aftermarket pipe installed on this bike, made by Arrow, which sounded fantastic!
After an exhilarating ride up and down I-90, I returned to Issaquah for lunch at Starbucks, where I took these pictures. Returning to I-90 Motorsports (if you're ever in Issaquah, stop by I-90 Motorsports - it's a great motorcycle shop) my bike is just about finished. I really appreciated the opportunity to test ride another bike, but am glad to be back on my America. 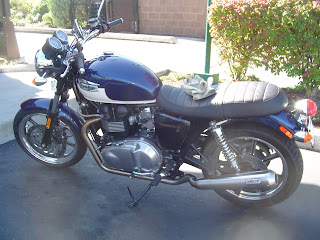 I like this bike and the one you have. When it comes time to buy a new bike it will be hard to choose between them.

It's always nice to be back on your own bike. I think it's the fear of damaging the loaner.
If you are free this Saturday, do you want to meet for lunch somewhere halfway ? I was thinking of a place on the water in La Conner. Or we could meet in La Conner and ride to Coupeville, or Anacortes

That reminds me - I need to go visit a longtime friend and Triumph dealer to see if I can grab a demo ride on one of the new Bonnies.

Danny, thanks. They are both great. I'm not as flexible as I once was, so I prefer the forward controls of my America. But, the SE is a super handling bike.

Canajun - you've got a great bike already, but if you've got the garage space...

The classic Bonneville -- with the two-tone paint job -- is a great looking motorcycle. And for those into matching fairings, Parabellum has a cool one to match the tank. I was lingering over the pictures that you took, and I'd still be inclined to black out the pipes and the headers on one of these for my own look.

And I love middle controls. If I had the cash for a second bike, Triumphs would merit top consideration. How did your tach fail? Did they tell you?

I agree that the Triumph is a great looking bike. Wish I could test drive one myself. Maybe someday.

Hello Jack - on the Triumph RAT forum, I found that there were several who had the same issue on the tach - it would simply get stuck anywhere from 1000 - 2500 rpm when you turned the bike off. Flipping the kill switch on and off would drop it back by 500. No reason was given, it was just replaced and the new one works.

Jim - hello, it was a great experience for me. The Bonneville SE is fairly light, and easy handling. I am a fan of the retro look, but it's nice that this has all of the modern amenities, like fuel injection. The best of both worlds.