Catching Up With Bobskoot In La Conner 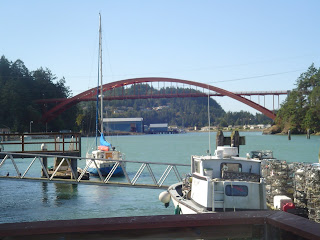 I had received an e-mail from Bob of Wet Coast Scootin fame - http://wetcoastscootin.blogspot.com/, with an invite to meet on Saturday the 26th, somewhere between Vancouver and North Bend. We had gotten very close to meeting on a prior occasion - Bob had stopped by to take some pictures in my town, but we just couldn't connect. So, with the anticipated weather on Saturday being quite nice in northern Washington State, we planned to meet in La Conner.
This would be my longest ride so far on any motorcycle, let alone my Triumph, so I wanted to plan my trip out to maximize the sightseeing and minimize the highway traveling. Another reason for this route was my wife's concern over me being on the freeway so much; while I told her that freeway riding is actually pretty safe since we are all going the same direction, I promised her I would take it easy.
I left Saturday morning about 8:45am, and proceeded along I-90. My plan was to take I-90 for about 15 miles, and then head north via surface streets, then return to the freeway (I-405) for a couple of miles. While the easiest route north to La Conner would be to travel from I-405 to I-5, there is a state highway, Highway 9, that almost parallels I-5 and takes one through some very picturesque scenery and small towns. I had never really traveled Hwy 9 before, even by car, so I took this route.
Hwy 9 passes by the town of Snohomish, known for its numerous antique shops and galleries. I stopped at the local Starbucks for some coffee, oatmeal, and wifi to let Bob know where I was. I then continued north on 9, and then made my way west, crossing I-5 and eventually reaching La Conner at about 11:20am.
Saturday was the day before the Oyster Run in Anacortes, which is a large rally for Northwest riders. I was hoping to find Bob easily - he said he would be waiting for me just outside the public restrooms on the main drag of town, but with all of the motorcycles, I couldn't quite make out his bike. Luckily, he recognized me, gave me a wave and I parked my bike. 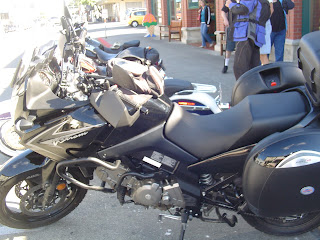 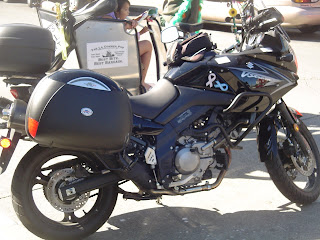 It was great to meet Bob - he is one of those guys that is very friendly online, and is the same in person. Since it was my first visit to La Conner, we walked a bit, and then decided on a lunch spot. 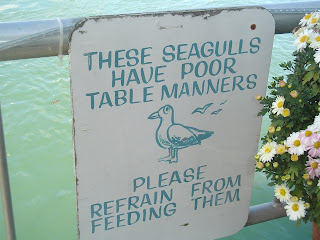 After lunch, we took more pictures and enjoyed the town. Bob then lead me on a ride to Edison, where there was a large gathering of riders, presumably on their way to the Oyster Run. 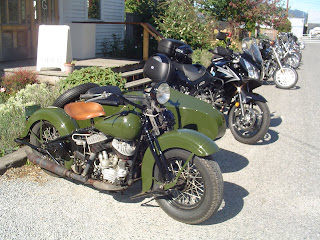 I had a meeting with a potential buyer of my GV250, so I had to leave around 2pm. Bob guided me to the entrance to I-5, we said goodbye and planned to meet again.
My return route took me past Lake McMurray. An old gas station remains, and was a great backdrop for a picture of the Triumph. 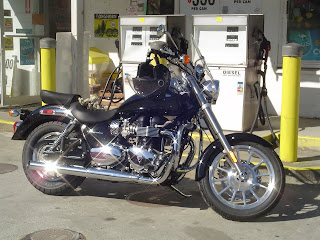 Bob, it was great to meet you, and thanks for giving me a tour of La Conner! 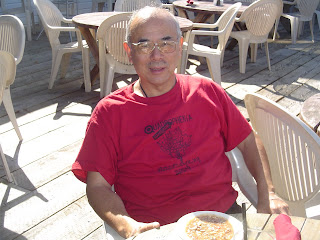 Glad that the two of you had a good time.
Was interested to see that this was a longer ride for you. I am strongly considering about a 300-350 mile round trip weekend trek later this month. My wife is not excited about it. I'm admittedly a bit antsy myself. I know it can be done on my scooter but am excited and a bit scared at the same time.
Kind of a bucket list thing for me. Something I have always wanted to do, but it will be a bit of a challenge. I will need to stop for pictures many times as well.
It must be nice to meet another blogger friend.

Thanks Jim - sounds like a great plan, as it must be very pretty in Kansas during the fall. I haven't had all that much time in the saddle, so allowing for plenty of time allows for the necessary stretch/bathroom breaks. Have fun!

It's great to be able to meet people with the same interests and also to get a little riding in. It's a shame you had to leave early as there are some fantastic roads in the Bellingham area.
I am glad that you were able to take the time to meet me in La Conner. Riding into unfamiliar territory is always exciting, new scenes, new roads & new photographic opportunities around every corner. Memories and social interaction to last a lifetime.

Finally we had a chance to meet and perhaps we can plan another ride soon.

I enjoy your blog and it was good to read (and see) you meeting Bobskoot. Maybe the three of us can meet sometime and do a little riding.

Your bike is nice, it's got that Triumph nostalgia but modern features.

My only regret is that Bobscoot was not wearing his pink crocs for your historic meeting. I am thrilled to see he did don a fusia "Quadraphenia" (sp?) tee shirt for the occasion. If nothing else, Bobskoot is a stickler for details.

The pictures of this run, combined with Bob's earlier text tell quite a story. I'm surprised your wife is leery of you riding on the highway. I rather enjoy the slab as I get to go like hell and save the wear and tear on my knees.

I hope to cross paths with you some day myself. Maybe in the company of Bobscoot too.

Its always a little weird for the first few minutes meeting people off the internet, you never quite know if they're a Mad Axe Murderer or not, obviously I mean Bob and not you lol...

Lance, I'm sorry I couldn't join the two of you last Saturday. Like Bob, I have to balance "my" time with "our" time, and Saturday had an X through it as I was going on the Oyster Run Sunday. LaConner is a great little town, and the Longhorn Saloon in Edison has a style all it's own -:)

Bob - that was a great day for a ride and lunch. Yes, let's get together again.

Mike, thanks for stopping by, and I dropped by your blog as well. Great stuff!

Jack, I agree with you, the freeway has less to be concerned about; plus with the added power of the Triumph vs. my 250cc cruiser I can either be ahead of or behind any potential problems.

Dave, it would be great to meet you and Linda sometime - Turkey sounds fantastic!

Chuck - It would be great to meet you. I enjoy your work, and I am a fan of the MP3.

firstly: to Jack "r" Pink crocs are so elusive in Canada that I didn't purchase them until the following Monday, otherwise I could have worn them to make myself more identifiable to Lance. I could have told him to just look for the dude in the Pink crocs walking around in the middle of the street

to Dave: Internet people aren't all that bad, after all, you did meet Mad Dog. So far I've only gotten good vibes. and ask Linda where my plane tickets are. I still haven't received them. I want to set up camp in your dungeon

back to Lance: I think this year is running out. Next year we will have to plan a weekend together somewhere. and don't forget to mark your calendar for July 2010.