Saturday morning my son and I attended the 2009 Seattle Motorcycle Show. It was a great father-son outing - we hit the show for an hour or so, he took pictures of me trying out bikes and generally acting silly, and then we went to have a nice lunch at an Indian restaurant in Bellevue before returning home.
The weather in Seattle has been pretty cold, in the 20's for the highs, not much riding weather, so looking at bikes is a good surrogate for riding. Last year was my first year attending the show, and I enjoyed it, but I enjoyed the 2009 show even more since I am a bit more of an experienced rider.
The major manufacturers - HD, Honda, Suzuki, Yamaha and Kawasaki - were all represented. My son got a picture of me on a 2010 Honda Sabre 1100: 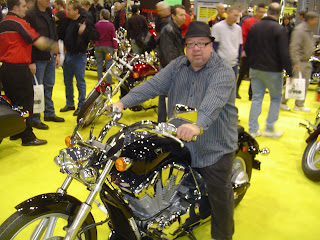 And me on a "show priced" HD Road King: 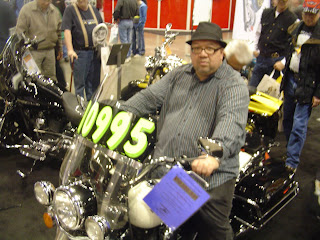 Of personal interest to me, Triumph and Ural, were missing from this show, which was unfortunate. But some new displays, such as these from the California Scooter Company and Confederate Motorcycles, were very interesting: 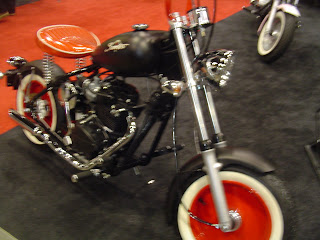 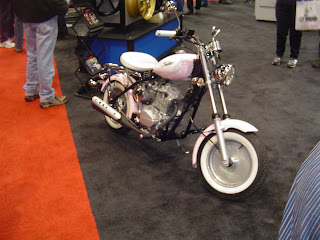 Above are two examples from the California Scooter Company. They pay homage to Mustang Motorcycles, a company that in the 50's-60's made a small-framed 300cc motorcycle. The California Scooter is a 150cc 5 speed, with a bobber/chopper look to it. For just under $5000 you get a cool little bike to ride around town on.
Confederate Motorcycles, out of Baton Rouge, create the essence of a motorcycle. This is their P120 Combat Fighter - an awesome collection of steel and motor: 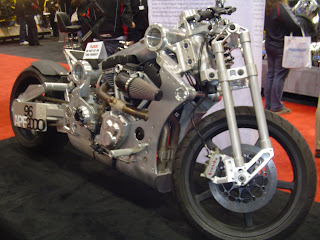 The local vintage MC group always brings some fine bikes to admire - this one a Norton: 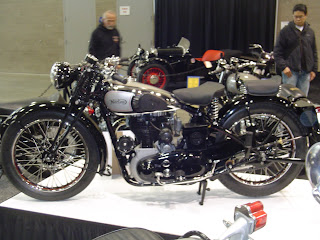 Here's a picture of me with Flo, who seemed to be glad I purchase my motorcycle insurance from Progressive: 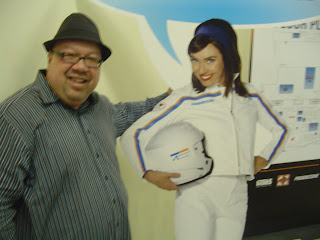 Looks like you and your son had a good time, Lance. Weather permitting, my son and I will have to go next year. You look good on a Harley (as well as your Triumph).

Thanks Mike - yes, it was a nice time for Aaron and I. There are sooo many bike choices, so little garage space (and money)!

sorry to have missed you. We got to Seattle very early and ended up at Pike Place Market to have lunch. The plan was to meet up with Brad, Trobairitz & Chuck around 3pm.
It was nice for you to bring your own "remote" control (Aaron) to take those pictures of you. Perhaps he should have sat on a bike too for his photo.

You look a little scary on that HD. I have always admired the Norton for some reason. Haven't ridden much here lately either due to weather and it would be nice to see a show like that.
Regarding Flo, kist keep chatting with her, I suspect she will loosen up.

Lance, the Butterfly of Panama told me Triumph was there, they just had such a small space there was barely enough room to move. She has her eye on a Bonneville T100...

Motorcycle shows are pure inspiration. After attending one in the winter, I find myself religiously buying lottery tickets thinking, "Let this be the one."

It looks like you guys had a good time.

Sadly, Ottawa seems to be "the city that motorcycle shows forgot". These are always a great way to spend a couple of hours dreaming about how you're going to spend that big lottery win that's coming any day now.

Hello !.
might , probably curious to know how one can make real money .
There is no initial capital needed You may commense to receive yields with as small sum of money as 20-100 dollars.

AimTrust is what you haven`t ever dreamt of such a chance to become rich
The company represents an offshore structure with advanced asset management technologies in production and delivery of pipes for oil and gas.

It is based in Panama with structures around the world.
Do you want to become really rich in short time?
That`s your choice That`s what you really need!

I feel good, I began to get real money with the help of this company,
and I invite you to do the same. If it gets down to choose a correct companion who uses your savings in a right way - that`s AimTrust!.
I take now up to 2G every day, and my first investment was 500 dollars only!
It`s easy to join , just click this link http://ymadysasur.1accesshost.com/ohuxih.html
and go! Let`s take this option together to become rich

Bobskoot, thanks - they were doing downloadable photos at the T-Rex booth, so I've got one of the both of us - will post soon.

Jim, thanks - I think I was mad that I couldn't take home one of the HD's - that Road King was definitely priced to move!

Orin - you (and the Buttterfly of Panama) are correct - there was a small display of Triumphs that a dealer brought. I was hoping that Triumph America would have brought out the Rocket III Roadster.

Jack - yes, when there is less riding, it's nice just to look at bikes and reading bike mags.

Canajun - the Road King is one of my favorites, and yes, that was a great price.

Anonymous, thanks for dropping by. I wish you the best with AimTrust, but I am waiting for my check for $10 million from the son of a Minister in Nigeria and cannot invest in any other opportunities.

I'm so envious, what a great time you had, the bikes look fabulous, Happy Christmas to you and your Family xx

clomid effects on men | purchase clomid without prescription - can i buy clomid over the counter, when to use clomid

Lance: sorry to have missed you. We got to Seattle very early and ended up at Pike Place Market to have lunch. The plan was to meet up with Brad, Trobairitz & Chuck around 3pm. It was nice for you to bring your own "remote" control (Aaron) to take those pictures of you. Perhaps he should have sat on a bike too for his photo. bob bobskoot: wet coast scootin